The criminal defense attorney has been handling felony and misdemeanor DUI cases in Georgia since 1976. For nearly 20 years, he has been Board Certified in DUI-DWI Defense by the National College for DUI Defense.

He has been on local television news about representing clients in celebrity DUI cases for the last three decades. Plus, national media, like People magazine, interviews him about other famous people with DUI or other criminal charges.

Recently, William Head, DUI attorney Sandy Springs, GA was voted best DUI lawyer Atlanta GA by Best Lawyers in America, twice (Lawyer of the Year 2012 & 2017). Plus, Super Lawyers has him top-rated for the last 17 years in both DUI defense and personal injury. Martindale-Hubbell has rated him at their highest level for over two decades.

Other lawyers in Atlanta that defend driving under the influence cases and related criminal charges rely on this drunk driving book in Georgia to assist them with answers to the toughest Georgia DUI law. Whether their questions relate to DUI penalties, license suspension, mandatory jail time for a 3rd DUI in Georgia or what type of driving permit would be available after a DUI conviction, the answers are in that book.

Other publications and organizations have named the veteran litigator as a best DUI attorney Atlanta, such as Atlanta Magazine, Georgia Trend and AVVO. In 2003, by vote of the entire membership of a national DUI defense lawyer organization (NCDD.com) he was voted America’s best DUI attorney.

Part of that national recognition came from Mr. Head’s leadership role in writing his first book (with the late Reese Joye of South Carolina) in 1991. That best-selling manual taught citizens accused of impaired driving 101 ways to win their DWI-DUI case. Things like finding DUI police report errors were outlined, so that accused drunk drivers could see how top criminal attorneys near me won cases.

Shortly after that book being released, the Columbus GA native sponsored the first training courses for both the NHTSA field sobriety tests (July 1994). Then, he sponsored the initial 4-day course for DUI attorneys being certified to operate the Intoxilyzer 5000 breathalyzer device in October of 1996. Today, the 5000 model is no longer used, and the CMI Intoxilyzer 9000 is being used in Georgia/

In the Peach State, beginning in 1992, he helped organize a group of dedicated GA criminal attorneys into a think tank for fighting DUI GA cases, and that group of DUI lawyers now has nearly 100 participants, and was modeled after the Joye-Cole Group that was first convened in 1990, in Charleston SC.

ABOVE: William C. Head, DUI Atlanta lawyer at Cambridge, Massachusetts in July 2003, when the award was given.

For some of our clients, a reckless driving offense is not a viable option. He or she may be in a job for which either conviction will terminate employment.

While a DUI suspends the license 100% of the time, adults age 21 and over pleading to reckless driving does not trigger a suspension of a Georgia driver’s license, by operation of law. If points on your record push you past 15 points in the prior 24 months, adult drivers could have a “points suspension.” However, and driver under the age of 21 at the time of the plea or being found guilty will suffer a license suspension in GA.

Because the first offender act that helps many felons and misdemeanants get a fresh start by record restriction is barred for GA DUI convictions, many people must fight their DUI in GA. Plus, there is not a conditional discharge in Georgia for driving intoxicated. By comparison, simple possession of marijuana is open for conditional discharge GA treatment in most courts in Georgia. For more details on GA DUI penalties, see the chart below. 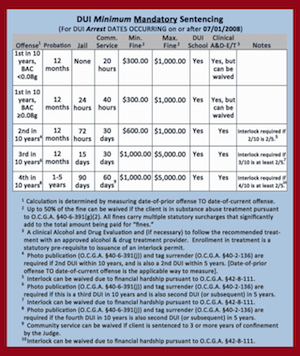 The veteran Atlanta DUI defense attorney is known nationwide and has traveled to other states when hired by clients who find his law office information online. The author, Mr. Head and ex-cop Cory Yager, DUI lawyer Sandy Springs, are the trio our DUI defense lawyers who run a law firm with its primary office location at the Prado Shopping Center on Roswell Road in Sandy Springs Georgia.

Our three award-winning DUI lawyers in Georgia travel the entire state of Georgia to help clients who are trying to avoid the “DUI unemployment trap” than many who plead guilty encounter. Other Fulton County DUI lawyer offices for the law group can be found in downtown Atlanta GA and Alpharetta GA, plus a Marietta GA office for Cobb County cases.

Call us 24 hours a day: (404) 567-5515. Free consultations on all DUI and other traffic cases. What do you have to lose, by getting your FREE lawyer consultation?