Starting in 1970, the National Highway Traffic Safety Administration (NHTSA), the federal government began doling out funding equal to today’s equivalent of about $5 million during a 28-year period. The impetus for doing this came to them after receiving a young woman’s California Ph.D. student’s psychology thesis on this topic in 1970.

Their goal was to come up with some simple-to-do, roadside standardized field sobriety tests (SFSTs). The federal agency’s goal was to create a method of standardizing these police officers’ roadside tests, by conducting research and gathering statistical studies on group performance of sober and drinking subjects.

Fifty years ago, this might have been needed, but today, offering a forensic portable breathalyzer test would make much better sense, and used a forensic device to get the needed information. The goal is to use a quick method of determining which driver is possibly drunk, to make an arrest decision.

After being challenged by criminal defense lawyers defending their clients nationwide, the federal agency has tried to justify promulgating these optional, voluntary roadside evaluations. Between 1984, about a dozen different versions of the manual have been created or updated, and the training programs were expanded to also try to train selected officers to become drug recognition detection officers in what is called the DRE program.

The HGN Meaning for driving under the influence cases. The horizontal gaze nystagmus (HGN) is a DUI eye test. After consuming alcohol of as little as one drink, the administration of the HGN “passes” with some drinkers will reveal involuntary jerking of the person’s eyes. 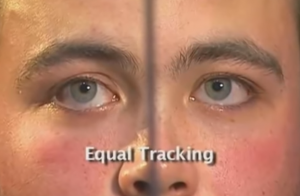 The HGN eye tracking test is the roadside evaluation that results in most DUI-DWI arrests. Plus, the HGN eye test will often be the central piece of videotaped evidence that convinces many jurors to vote to convict you. Plus, you were never told that it was voluntary, and you will not be allowed to stop and call DUI lawyers near me.

The “walk a line” test, heel-to-toe, called the walk and turn (WAT) and one leg stand (OLS) SFST evaluations are clearly balancing tests and many jurors know (when watching these being given on video recordings) that they could not perform those roadside tests either. But the horizontal nystagmus test requires no agility, no conversation from the suspect, and the officer has been “certified” to give and score the initial HGN evaluation.

For a gaze nystagmus HGN test, police are trained to start with an equal tracking protocol, and to check for “resting nystagmus.” Then, using a fingertip or an HGN pen test, he or she has you focus on the TIP of the object and track it as it is being moved.

The passes are to go across the person’s field of vision, 12 inches to 15 inches away from the face, and at eye level, or slightly above. In the image above the officer is 4” or more ABOVE eye level. 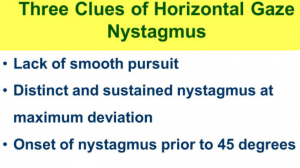 Since the HGN alcohol test asks very little “involvement” by the test subject, most frightened drivers go along with the exercise, primarily due to not knowing they can decline the test. Plus, in over 9 of 10 DUI arrest videos our lawyers watch, the investigating officer does not tell the person the evaluations are OPTIONAL.

The same omission of wording that communicates the voluntary nature of field sobriety testing, the other two roadside evaluations will be far more demanding. In addition to being balancing tests, which people 40 and older generally cannot do, these exercises require drivers to count out loud, and to stand or walk in an unnatural manner. While standing this way, the test subject is required to hear and remember lengthy instructions while watching a demonstration by the officer before beginning.

Plus, if 4 or more clues are observed in your eye movements, this gaze test nystagmus evaluation justifies the officer’s DWI-DUI arrest decision. The law enforcement officer is looking for lack of smooth pursuit, observing distinct nystagmus at maximum deviation, and the onset of nystagmus prior to 45 degrees. 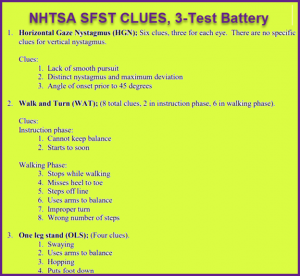 On the WAT and OLS evaluations, just 2 clues constitute a “fail,” on either or both roadside exercises. Since the walk and turn evaluation offers over 76 chances to “miss” something, and the one leg stand offered over 122 opportunities, you then see how unfair the grading method is.

Each evaluation given has precise SFST instructions on what you are supposed to do, and in what manner. On the second set of passes, the officer is trained to look for sustained nystagmus at maximum deviation (as far out as your eyeball can turn), and he or she must see it for 4 seconds or longer, while holding it there. 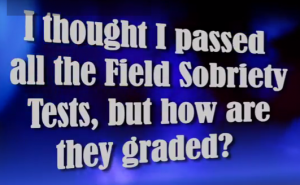 The arresting officer will state that seeing 4 or 6 clues horizontal nystagmus alcohol test means that his or her training indicates that about 68% of drivers with 4 or more clues will have an illegal blood alcohol level. In no way do any of the roadside evaluations prove alcohol impairment. Even Wikipedia’s link to field sobriety testing is wrong, in claiming that correlation to proof of driving impairment.

List of 10 Reasons to NOT Attempt Field Sobriety Tests 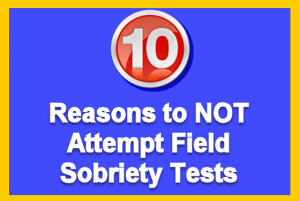 These 10 primary reasons are provided so that you know valid reasons for declining this eye test for alcohol use detection, as well as the coordination and balances tests that are offered afterward. In fact, all “made-up-by-police-for-police” tests are 100% VOLUNTARY, and you cannot be forced to do any of them. All three standardized field sobriety tests promulgated by NHTSA are what true scientists call “junk science.”

What does vertical nystagmus indicate? This is the aftermath of the VGN eye test, where the investigating officer makes two vertical passes on an unscored test. in almost zero cases does this evaluation do anything to further the officer’s investigation of a DUI charge.

Our Criminal Lawyers Near Me Offer a DUI Lawyer FREE Consultation

Our three FREE consultation criminal attorneys are all instructors in the NHTSA field sobriety tests. Our law group DUI defense lawyers know how to cross-examine law enforcement officers about the claimed percentages of reliability of the three NHTSA roadside sobriety tests. Call today to receive your 100% FREE DUI case consultation: 404-567-5515.