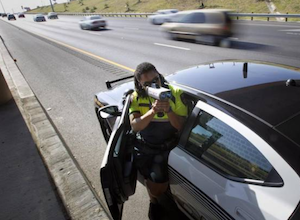 There are many different ways an officer is able to establish that someone is speeding. These various types of methods include visual or through the use of technology. Police officers go through training to make sure they are able to use the different techniques it takes to catch someone for going over the speed limit. However, the officer is not always accurate with their Atlanta speeding detection. If you have been pulled over for speeding, call a speeding ticket lawyer who has a background in dealing with traffic offenses today.

Tools and Tactics an Officer Uses to Catch Speeders

A police officer is trained to visually estimate how fast somebody is going and can use a radar or laser device if they need to. Law enforcement can also pace a vehicle, which is when they drive behind a person a certain amount of distance to determine how fast the car is going. Pacing is admissible evidence in court for a case involving speeding detection in Atlanta.

Radar, laser, pacing, and visual estimation are the main tactics a police officer uses to determine if someone is speeding. The officer is also not required to show the person they pulled over the actual speed shown on the laser or radar. It is a common misconception for most people that police have to show the person the number on the radar.

Once someone is pulled over for speeding, they should not argue with the officer on the side of the road. However, the defendant could argue in court they were not going as fast as they were accused of.

How Lawyers Defend Against a Speeding Violation

A defense against an Atlanta speeding detection case in court could be that the state was unable to lay a proper foundation. There are certain documents that the officer would need to present to show that the radar was working properly and the road was properly laned out. The defendant could argue there was an error in the operation of the radar gun, but the judge or jury is most likely not going to believe the problem was an error. This means the defendant would have to find a way to argue that the radar gun could not be used in evidence. The radar gun and laser are very accurate at reading speeds, but there could be a human error. All attorneys near me will work to find any errors in police procedure or any miscalibrations of the radar gun.

Should You Hire an Attorney to Fight the Speeding Ticket?

Speeding cases are difficult for anyone to win. The best option is usually to hire a lawyer who could argue to get the speed lowered to a level where the defendant does not end up having a record. Most of the time arguing a speeding case in court is a waste of time and energy. Trying a speeding case is likely to end up costing more money than it is worth. However, depending on the circumstances of the case, an attorney could help get the ticket thrown out. For more information regarding Atlanta speeding detection, contact good lawyers near me who have the experience with all types of traffic violations. Attorneys Larry Kohn and Cory Yager can be reached at (404) 567-5515 day or night.