For those never previously charged with DUIs, for violating Georgia's drunk driving laws or drugged driving laws, these 5 confusing aspects of the police encounter seem to be prevalent among our clients:

Assuming the pullover was legally made, any refusal of the post-arrest forensic test will trigger the officer claiming that you violated this law, which then results in her or him taking your plastic license and replacing it with a 30-day paper form called a DDS-1205. Within THIRTY DAYS, that arrested driver must appeal or (if eligible) install a DDS GA 12-month ignition interlock device or suffer a FULL 1-YEAR LOSS of DRIVING PRIVILEGES.

Georgia DUI laws proscribe DUI-alcohol, or drugs or toxic vapors or any other impairing substances (like weed, or even over the counter drugs, if that person being investigated has consumed that drug to the extent of impairment. The various types of DUI are primarily located in the first six subsections of OCGA 40-6-391.

DUI penalties in Georgia are among the nation's most punitive. Every DUI in GA brings mandatory 1 year probation (minus any days in jail), fines and surcharges that can exceed $2000, DUI school, alcohol and drug screening, community service hours, reporting to probation and making those monthly fees, and possibly having to install an ignition interlock device (IID). 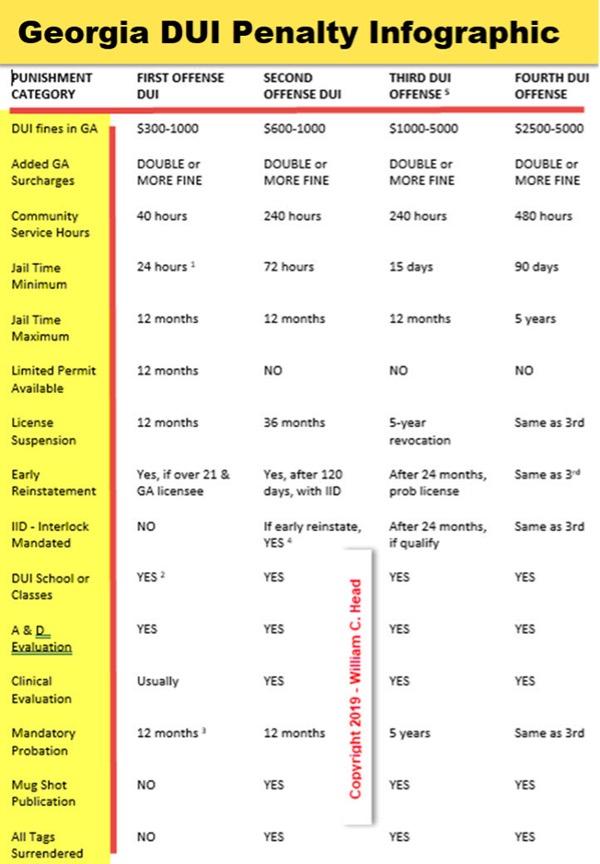 Their next most common question is "what is the cost of a DUI?" That question can be interpreted several different ways. Regardless of state, a driving while intoxicated (DWI) vs DUI conviction in any state puts a permanent criminal record on your NCIC "history" that can never be removed. Plus, Georgia lacks any law for future expunction of a DUI in GA.

How does having a 2nd DUI in GA affect my chances? Prosecutors will be fighting defense efforts to reduce or drop any repeat offense cases much more intensely than a lifetime DUI 1st offense. If a prior conviction occurred with the past 10 years, that second offense DUI arrestee faces not fewer than 72 hours of jail time, and at least 18 months of driver license problems, plus many other very harsh penalties (e.g., paying a license reinstatement fee), but only if convicted.

Most judges, however, trust the prosecuting attorneys' judgment, when a negotiated deal needs to be made, when a hastily charged DUI is lacking a forensic breath testing result or blood test. In certain cases, a reduction to a lesser motor vehicle crime, like reckless driving GA may be possible. 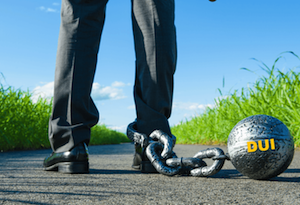 If the outcome of your DUI arrest is a conviction, then that means that you will have to deal with that public record for life. That is because (in Georgia) the #1 DUI penalty (if convicted) is a lifetime criminal record that will create havoc for that offender in various ways, over the remainder of the life of any person convicted of DUI charges.

Getting a Free Lawyer Consultation About Your Atlanta DUI

The first offense DUI lawyer cost deters some people charged with DUI in Georgia from seeking the best drunken driving legal counsel. Much like learning you have an illness that needs surgery, your goal must be to eliminate this problem, and not let it affect the balance of your life.

Hiring a top DUI attorney near me with decades of experience, top ratings with Super Lawyers and Martindale-Hubbell and hundreds of 5-star reviews is the best plan. Very few nearby criminal law firms (in the Sandy Springs GA zip codes) will have even one GA DUI lawyer to meet the foregoing requirements. This can be for a DUI lawyer 30342, DUI attorney 30328 or DUI defense lawyers in 30350.

Our local group of trial lawyers consists of three candidates who can be that Georgia DUI lawyer. William Head alone has 18 straight years as a Georgia Super Lawyer.

In fact, if cumulative attorney ratings and being Board certified in DUI defense are the measuring stick to be used, Mr. Head will be rated as the best DUI lawyer Atlanta and the best DUI lawyer in Georgia. Plus, all three law partners are DUI law book co-authors, which is unique within the State of Georgia, if not the nation.

Georgia DUI Lawyers: Who Can Get a DUI Dismissed?

The most common reason is that accused DUI drivers do not believe that even the best DUI attorney near me can beat their intoxicated driving case. The second most common issue is because they know the best impaired driving lawyer will have DUI attorney fees higher than most less qualified DUI criminal lawyers who do not achieve a high percentage of non-DUI resolutions.

Analyzing the search intent of these phrases, some want to not drive far to meet their drunk driving attorneys. Others want just about any Atlanta Georgia area DUI defense attorney located in DeKalb County, Gwinnett County, Fulton County DUI attorneys or Cobb County DUI lawyers that advertise for being a cheap DUI attorney, or maybe just call themselves "affordable."

QUESTION: If you hire a low-cost DUI lawyer and lose or have the DUI placed upon your criminal record for LIFE and you lose your driving privileges, is "affordable" a favorable word? You only get one shot at winning, in criminal cases.

This "defeatist" attitude is why our criminal defense lawyers nearby offer an initial, detailed FREE consultation. Plus, because administrative suspensions (for a first DUI offense) will be imposed if no administrative license suspension appeal to an administrative law judge OR opting for an interlock restricted driving permit and the ignition interlock device are not IN PLACE within 30 days after the arresting officer's traffic stop.

Here is our DUI law firm's 4-prong promise to every criminal case client that contacts us:

If you plan to win, hire an experienced Sandy Springs DUI lawyer for your DUI defense. Self-representation is OUT of the question, for those who need to try to avoid being found guilty at their court date.

This rule is especially true for any criminal charge (like hit and run GA) that has a mandatory court appearance in Georgia. Because such traffic crimes require a court to impose jail time and license suspension, you need to "lawyer up" well in advance of your Sandy Springs GA date to appear. Call today for your FREE lawyer consultation: (404) 567-5515.

Our three drunk driving defense attorneys at our DUI law office are experts at dealing with implied consent law issues and saving a driver's license. Our three law partners have had thousands of DUI cases dismissed, reduced, or resolved favorably at trial.

Being part of the DUI lawyer Atlanta group of best DUI lawyers in Georgia, our team has found that the Sandy Springs office location is the easiest to get to. Criminal defense legal services are not like a box of oatmeal that will be the same in any grocery store. 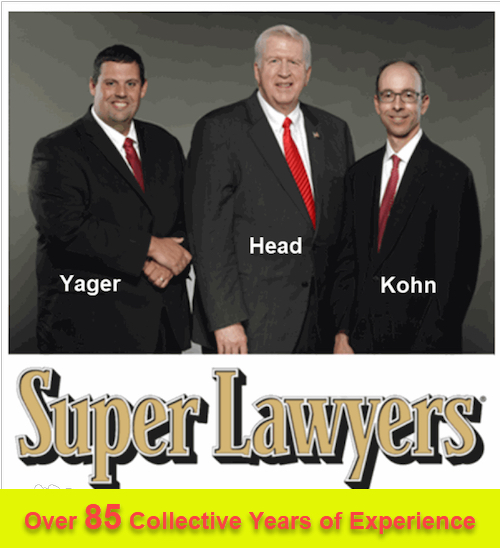 Skill levels and track records for your legal advisor differ widely, at different law offices nearby. Fewer than 5 law firms in the Peach State have DUI attorneys near me willing to travel statewide to every Georgia traffic court to defend clients for felony or misdemeanor traffic violations. Georgia lawyer and Partner in the Firm, Cory Yager, will travel to any court in Georgia.

In some cases, our criminal law attorneys' actions at this court can prevent a case being bound over to Superior Court as a felony, by entering a plea to a lesser criminal offense. An example of this is a DUI-accident for which the personal injury to another may rise to the level of serious injury by vehicle GA.

Visit this national DUI-DWI attorney directory for connections to many hundreds of other DUI vs DWI attorneys near me.