Why a Grand Jury Indictment Is Needed for a Serious Felony?

Both in the English common law countries and the USA, the indictment procedure of assembling a Grand Jury is NOT a trial, and the Grand Jurors have no power to determine “guilt.” Beginning with the Magna Carta in 1215 A.D, the English people (over the next several centuries) routinely sought to create a “brake” on the unlimited power of the Crown (meaning the King of England or Queen of England).

One of those buffers or impediments against the Monarch’s absolute power was to mandate (before any trial jury could occur) that a large group of county citizens had to agree with the Government about the sufficiency of evidence of criminal acts before a trial could be utilized to try to gain a conviction. The secret grand jury hearing would then be undertaken, with the District Attorney presenting the existing, known evidence in such a way as to have at least 12 of the grand jurors see that a felony indictment was supported by probable cause. When this occurs, a “sealed indictment” known as a true bill, would be issued. If fewer than twelve grand jurors vote to indict, a “no bill” is issued by that Grand Jury.

As can be learned in our primary grand jury indictment page, a Prosecutor can try again, with the next Grand Jury.

Indictment – What Does it Mean?

This “large” group of local citizens took on the name “grand,” since the purpose was to have MANY in the group agree before any person could face capital punishment or possibly life imprisonment. The word “grand” was used, since a normal trial jury would have 12, and a grand jury would empanel 23. 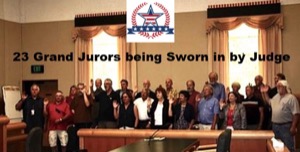 The value of such a barrier to overreaching by the Government did not escape the Founding Fathers in the mid-1700s in the American colonies. Our Bill of Rights contained this GUARANTEE, in one of the several “due process” rights created by the Fifth Amendment. Yet, none of the high standards of “proof beyond a reasonable doubt” apply to grand jury actions. The DA has virtually unbridled ability to affect the grand jury’s decision to indict or not.

“No person shall be held to answer for a capital, or otherwise infamous crime, unless on a presentment or indictment of a Grand Jury, except in cases arising in the land or naval forces, or in the Militia when in actual service in time of War or public danger”.

Although rare, some errors in the empaneling of a Grand Jury can void its actions. Certain qualifying questions must be asked by the Judge that empanels the Grand Jury. Plus, an analysis of who could serve on that Grand Jury may be fruitful in challenging the composition of the Grand Jury.

If a person learns that he or she has been indicted, or that an arrest warrant relating to an alleged crime is “active,” he or she needs immediate legal counsel. Not being prepared for handling the person’s release on bond can lead to a long list of adverse consequences, including loss of job, being put into a jail cell, and not being able to obtain all their prescribed medications.

Call today for a FREE lawyer consultation. Author Cory E. Yager, Larry Kohn or William Head are here to assist you. Our lawyers near me in metro Atlanta can help. (404) 567-5515.

When a felony DUI vehicular homicide Georgia occurs, or any other serious felony charge in Georgia (rape, aggravated assault, domestic violence felony in GA, drug possession, aggravated sodomy, DUI felony ), the usual steps are for police or investigators to make an arrest, based on an arrest warrant executed before a Judge. Then the accused citizen is placed in custody, subject to being able to make “bond” in most cases.

In cases that have been accused as a felony in GA, our goal is to find a fatal flaw in the language of the indictment. Once that is done, our strategy is to allow “jeopardy” to attach, once a jury is sworn in, and then move to dismiss the felony charge, which is called a nolle prosequi, if the DA realizes that he or she cannot succeed on that charge due to a failure of proof. In such cases, that “count” of an accusation or indictment can never be pursued again.